Last news
In the State Concert Hall named after A.M. Kats a press conference devoted to the opening of the 83rd concert season took place
White Festival at Novosibirsk Philharmonic - the time of discoveries
SibJazzFest-2019 presents: issues of the development of jazz music in the modern world will be discussed by leading jazzmen at a round table.
Photo reports 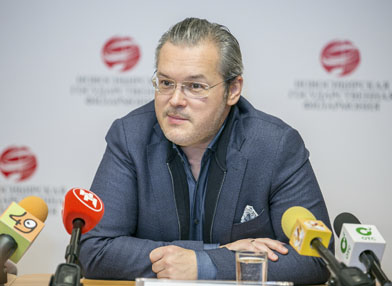 The Trans-Siberian Art-Festival in Novosibirsk is closing on 12 April. The forum was opened on 31 March and united stars of world performing art. There were changes in the program of the closing concert: due to unsurpassable circumstances Valery Gergiev, who was supposed to conduct Novosibirsk Philharmonic Orchestra on 12 April, could not come to Novosibirsk.

Vadim Repin said that it only became clear yesterday that due to some circumstances Valery Gergiev could not be in Novosibirsk. “Of course I was solving a question how to come out of this challenging, very difficult situations – Vadim Repin remarked – It is a closing concert, and everybody was exciting about it, me too – because the program which we chose is one of the peaks of musical literature- Violin concert of Dmitry Schostakovich.

Vadim Repin declared that he came to the decision to perform such a difficult violin concert of Schostakovich will be performed on 12 April without a conductor for the first time in history. This way, this concert will become a some kind of world premiere – the third in the festival program.

“If our Novosibirsk Philharmonic orchestra was not on a maximally high artistic level, I would never take such a risk. But I believe in every musician and I am sure they will meet the challenge with my help and I will meet the challenge with the help of their talent, their commitment and confidence in me. This fact, connected with risk, will be a real unforgettable moment for everybody. At least I won’t forget these impression” – Vadim Repin smiled.

The Trans-Siberian Art-Festival takes place from 31 March to 12 April. It is the first project in which the world famous violinist, native of Novosibirsk, Vadim Repin acted as an art director. An unprecedented big festival united such stars of world art as Svetlana Zakharova, Olga Borodina, Kent Nagano, Nikolay Lugansky and others. The festival was dedicated to the founder of Novosibirsk Philharmonic Orchestra, conductor Arnold Kats. The major part of the concerts was held on the stage of Arnold Kats State Concert Hall. There were also concerts in Iskitim and Berdsk. In 5 concerts out of 11 Novosibirsk Philharmonic Orchestra took part; also such collectives of Novosibirsk Philharmonics as Chamber orchestra and Filarmonica-quartet took part in the program of the festival.

On 3 April Vadim Repin and Novosibirsk Philharmonic Orchestra carried out a world premiere of the concert “Voice of the violin”, composed by Benjamin Yusupov especially for the festival. The author conducted the composition himself. On 9 April there was a world premiere of “Violin mania” program by Alexey Igudesman. On 10 April there was a program “Pas de deux for toes and fingers” for the first time in Russia – joint project of the couple Vadim Repin- Svetlana Zakharova.