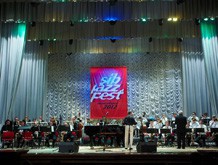 The international jazz festival Sib Jazz Fest ended by a five hours concert on 17 November. The final point of the festival concert program was a united performance of two largest jazz ensembles – Novosibirsk Big Band under the direction of Vladimir Tolkachev and Anatoly Kroll Big Band from Moscow.

The festival opened on 14 November by the performance of the legendary guitar player John McLaughlin and The Fourth Dimension band. The musicians offered the audience compositions from the album Now Here This, which was released one month ago. The hall was full, many people arrived specially for this concert from other cities. There were even those who arrived from Moscow.

This year the program of Sib Jazz Fest included 4 concerts on the stage of the Palace of Railway workers and a traditional final jam-session, which was held in the restaurant of Azimut Hotel Sibir. The concerts on 15,16 and 17 November comprised 3 sets different in genres. We had the following musicians on stage: Tricia Boutte (vocal, The USA- Norway) and jazz orchestra “Siberian Dixieland”, Carlo Actis Dato Quartet (Italy), The “A-band” and Ada Dyer ( vocal, The USA), Creative Collective (The USA), Jean-Luc Ponty ( violin, France) and his band, Anatoly Kroll Big Band (Moscow), The Rosenberg Trio (The Netherlands), Silvia Droste ( vocal, Germany) and Vladimir Tolkachev Big Band. Also a Russian-American quartet presented a program “Tribute to Herbie Hancock”.

The legendary violinist Jean-Luc Ponty, John McLaughlin partner in Mahavishnu orchestra, said from the stage that Novosibirsk is a special city for him. “10 years ago I had a chance to work with Vadim Repin on the same stage and I was deeply impressed – says Jean-Luc Ponty, I consider Vadim the most outstanding violin player of our time, and Novosibirsk is his motherland, for me personally”.

The festival ended by a joint performance of two largest jazz ensembles – Novosibirsk Big Band under the direction of Vladimir Tolkachev and Anatoly Kroll Big Band from Moscow. Anatoly Kroll said from the stage that a meeting of two jazz orchestras on one stage required immense organizational efforts.

“Joint performance of such big collectives is a rare thing nowadays. It was more than 10 years ago when Vladimir Tolkachev Big Band and Oleg Lundstrem Big Band met on one stage in our city” – says the director of Novosibirsk Philharmonics Alexander Nazimko. At the moment of a joint music-making there were more than 40 musicians on stage.

Kirill Moshkov, the constant host of festival concerts, the chief editor of the only specialized magazine in Russia “Джаз.ру” (“Jazz.ru”) noticed, that the high level of the festival set on the first “rebooted” SibJazzFest successfully remains the same.

“There are not so many festivals in Russia, with a clear artistic policy of international level- where organizers speak English freely, can hold negotiations on a very high level and know how to behave on the international market, — the expert said, — Sib Jazz Fest can be for sure related to such festivals and it already became a convincing brand among them”.

A high organizational and performing level of the International jazz festival Sib Jazz fest was included into the program of the Cultural Olympiad “Sochi -2014”- a unique project of organizers of The Olympic Games 2014, which presents the best cultural events of the country. The All-Russian scale of the Cultural Olympiad allows involving each citizen of the country into a grandiose cultural holiday, saving and increasing the cultural heritage of Russia.