Chamber Orchestra tour: from «Alice in Wonderland» to organ premiere 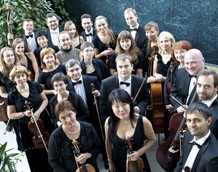 From 2 to 7 November Novosibirsk Philharmonic Chamber Orchestra toured to St. Petersburg and Perm. On these five days the musicians performed four concerts that were marked by significant musical premieres. On 3 November the Chamber Orchestra took part at the premiere of the «Alice in Wonderland» in the frames of the XIII Festival «International Conservatoire Week». The work is based on music of Petersburg composers Anton Tanonov, Svetlana Nesterova, Ekaterina Blinova-Ivanova and Gabriel Prokofiev (UK), the grandson of the great composer Sergei Prokofiev.

The text was based on Lewis Carroll tales and letters of the children of blockade Leningrad. At the premiere in the Small Hall of the St. Petersburg State Conservatory it was performed by People's Artist of Russia Svetlana Kruchkova.

On 4 November at the Great Hall of St. Petersburg Conservatory the Chamber Orchestra under the direction of its chief conductor Alim Shakhmametyev presented the program with the writer-satirist Semen Altov. Works by young composers, written on the motifs of Alrov’s miniatures alternated with the monologues of the writer. On November the program was presented to Novosibirsk audience, the concert took place at Arnold Kats State Concert Hall.

On 5 and 6 November the Chamber Orchestra of Novosibirsk Philharmonics performed at the VIII International Festival of Organ Music in Perm.

At the opening ceremony on 5 November the orchestra premiered Concerto for organ, strings and percussion and the work «Tongues of fire» by Swiss composer Carl Rutti. The album of the Chamber Orchestra «Tongues of fire» entered the list of the best discs according to the «Critics Choice 2012», prestigious British music magazine "The Gramophone Magazine”. At a concert in Perm Martin Heini, the organist form Switzerland played solo. The orchestra has worked many times in Novosibirsk and in Europe.

On the second day of the festival the Chamber orchestra performed the Symphony for Organ and Orchestra №1 by French composer Alexandre Guilmant. It was the first cooperation of the orchestra with István Mátyás, Austro-Hungarian organist.

«Our performances were very intense. Every day — concert, and every day — new program. We are inspired by sold our halls for our concerts, positive feedback of the audience and new invitations from leading Philharmonics of the country» — Director of Novosibirsk Chamber Orchestra Aliona Bolkvadze shared her impressions.