Chamber orchestra is back from the big tour 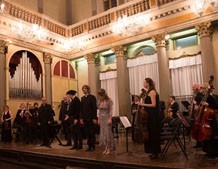 From 22 January to 9 February Novosibirsk philharmonic chamber orchestra performed in Switzerland, Belgium and Italy in the frames of the program of cultural exchange.

“European tour of the Chamber Orchestra tour becomes a tradition, this year we opened a new country – Italy, — Aliona Bolkvadze, director of the orchestra, said. — This tour was a great gift for the anniversary of the orchestra: in April we will celebrate 20 years. The orchestra was very warmly received in all concert halls; there were many enthusiastic reviews from discerning listeners, we appreciate it much.”

In Switzerland the orchestra performed in Schaffhausen, Luzern and Zurich. Russian classical music was executed as well as music of Swiss composers. The orchestra was conducted by Swiss maestro Rainer Held who has a long-standing partnership with the orchestra. One of the latest achievements of this joint work was a high appreciation from European music critics: the album of the Chamber orchestra «Tongues of fire», recorded under the baton of Maestro Held, entered the list of the best CDs according to the «Critics Choice 2012» of the prestigious British music "The Gramophone Magazine”.

In Italy the concert of the orchestra took place on one of the oldest and most famous stages of Europe — in the Concert Hall of the Conservatory named after Benedetto Marcello in Venice. The musicians of Novosibirsk philharmonic society presented an unusual program «Modern Baroque». The concert was a continuation of the thematic conference organized by the Institute of Venetian art, music and writing. The Grammy nominee Federico Sardelli conducted. Violinist Anton Martynov and cellist Mark Drobinsky played solo.

In Belgium the famous Belgian marimba players Ludwig Albert and Chin-Cheng Lin took part in the concerts of the orchestra. These mmusicians have many times performed with the orchestra in Novosibirsk, the last time — in December in the frames of the festival «Classics» dedicated to the 75th anniversary of Novosibirsk Philharmonic Society. During Belgian part of the tour the Chamber orchestra premiered the concert for the marimba duo and string orchestra, written by Chin-Cheng Lin.